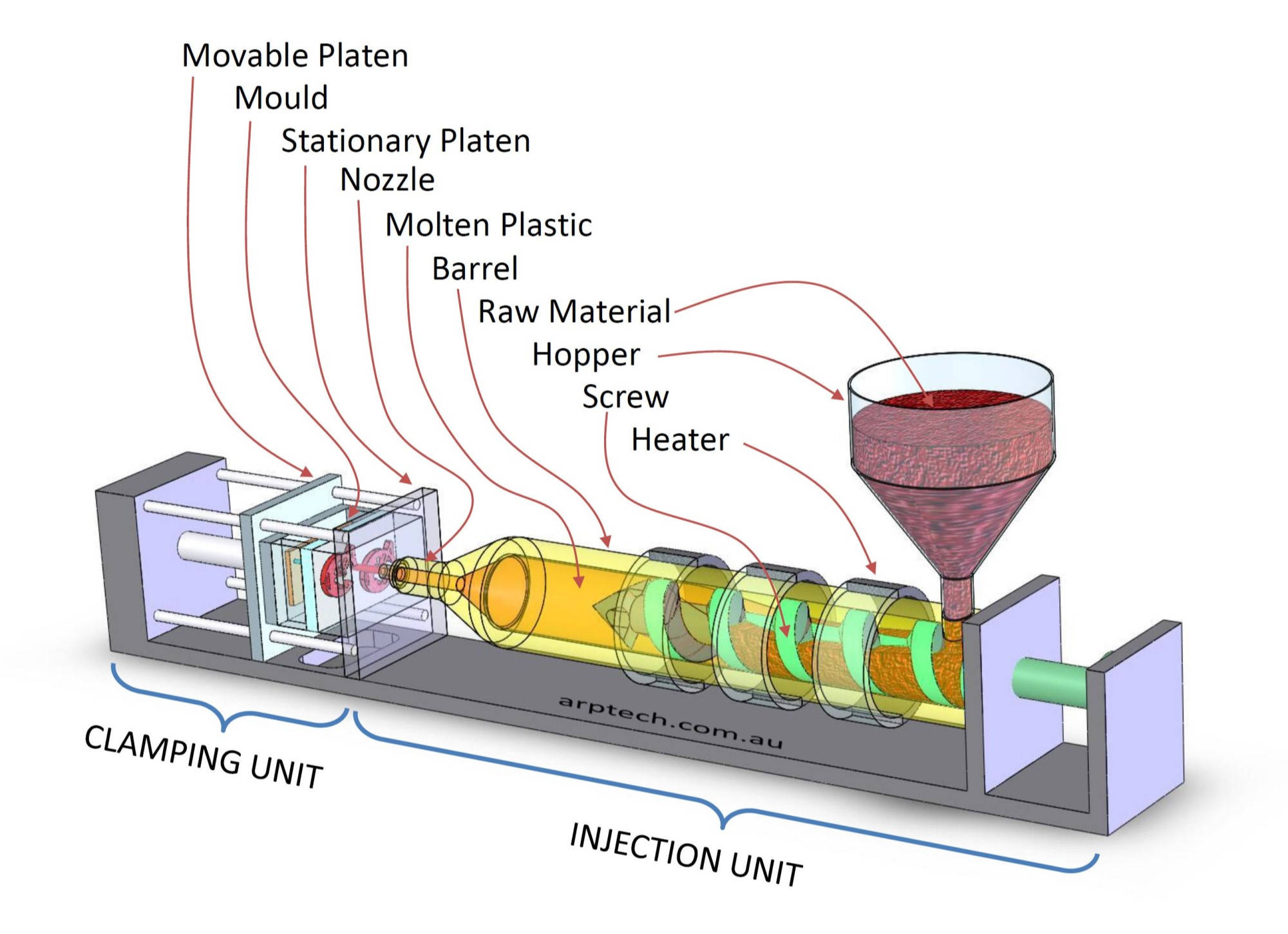 The injection moulding industry progressed slowly in the beginning, however industry flourished rapidly after World War II. There was a huge spike in demand for low-cost, high volume plastic products in the 1940s.

The plastic injection moulding industry has come a long way since its inception, with the ability to produce large quantities of plastic products at a low price. New machines are capable of producing a wide array of products, from small Lego blocks to large automotive dashboard. The plastic moulding industry has evolved over the years, making significant contribution to many industries including, electronics, medical, automotive, aerospace, packaging, construction, healthcare, toys and consumer products.

What is Injection Moulding Process?

Injection Moulding is a manufacturing process for producing parts by injecting molten material into a mould, which forms the raw material into the desired shape, inherited from the mould cavity shape.
First step is to prepare the mould, before going any further let's understand:

What is injection mould?

The mould consists of two halves, the core half and the cavity half. The mould has many components, but the two main components of the mould are core and cavity. Once the mould is in closed position, the void formed between the core and cavity is filled with molten material, which is the exact replication of the desired part shape. Hence, molten material is allowed to cool down before ejecting the finished part from the mould.

Typically, moulds are prepared by CNC machining out of aluminium or hardened steel. However, 3d printed moulding inserts are also getting common, specially for Rapid Tooling, used for low volume production of injection moulded parts. The thermoplastic resins are commonly used in the injection moulding process because they are easily recyclable and can be melted and cooled down several times, limiting material wastage. Injection moulding is a very popular process for producing plastic products simply because it is the best means of producing large quantity of identical plastic parts in short lead time.

Injection moulding is a manufacturing process used for producing parts by injecting molten resin into a mould. Most of the mass-produced plastic items are made by injection moulding process. Injection moulding is a very adaptable process used for moulding a wide range of thermoplastic materials and finishes, which makes it a popular option in numerous industries like automotive, aerospace, electrical, electronics, transportation, medical and healthcare. Firstly custom-made moulds are prepared, Tool steel is common material for preparing the moulds however aluminium or 3d-printed mould inserts can be used for short-run production. These moulds are mounted on an injection moulding machine and injected with a raw material which shapes the polymer into the desired form, creating identical copies of the same part.

The injection moulding process uses a special purpose machine consisting of three main parts: the injection unit, the mould and the clamping unit. Firstly, plastic granules are loaded from a hopper into a spinning auger. These granules are passed through a heated chamber, called a barrel, where plastic is melted and injected into a mould with high pressure using a plunger. The moving part of the mould is forced against the fixed part by a hydraulic ram with several tonnes of force. The plastic enters the mould cavity through a gate and runner system. After the cavity is filled, the mould is held closed during plastic injection and cooling cycle until plastic solidifies. At this time, the auger screw and barrel retracts to its original position to get ready for the next cycle. Once the moulded part cools down completely, the mould is forced to open by the hydraulic ram and the moulded item is ejected out for further processing. The next injection moulding cycle repeats as soon as the mould closes, and the plastic is injected into the mould cavity.

Why use Injection Moulding Process?

How can we help you for short-run production of plastic parts?

Please feel free to fill up our online quotation form for obligation free quote.
Get Quote